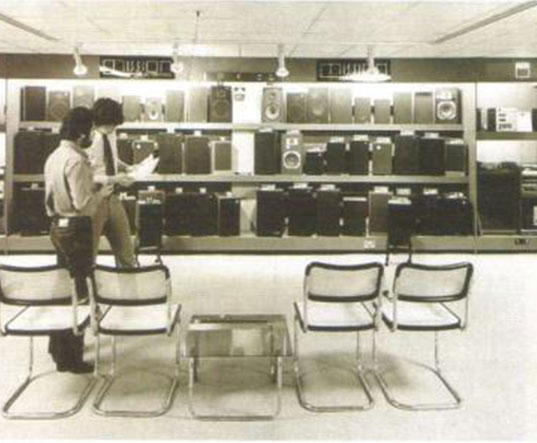 Mission, was founded in 1977. The company is located in Huntington, beautiful Cambridge shire, England. Not only in the development of acoustic engineering or the application of new technologies, Mission is a leader in the entire industry. Speakers under the brand of Mission are the perfect combination of advanced technology and exquisite craftsmanship, and have made an extremely important contribution to the innovation and application of speaker system technology in the entire audio field.

In 1979, the 700 series of Mission was officially launched on the market, and the first set of speakers with an inverted speaker. This is also the most classic technology in the audio industry till Today.

In the 1970s and 1980s, the entire audio industry attached great importance to material application technology. With the development of polymer chemistry, more materials and composites were produced. Mission fully applied these new materials and technologies to design and production so that Mission can develop rapidly. The birth of 760 series speakers has won the best seller in British for three consecutive years.

In the 1990s, Mission quickly emerged as an international brand and was in a leading position in this industry. It has received unanimous praise from home and abroad, and the products have became a model of high quality, playing a pivotal role in the world audio field.

The PILASTRO series, the flagship of the Mission, was successfully exhibited for the first time in 2001. This series of products adopts floor-standing decentralized structure and new drive technology. PILASTRO is an achievement in the art field and one of the best representatives of the British audio manufacturing industry.

Mission constantly breaks through the technical barriers and has always been in the leading position in the audio industry, which relies on its continuous investment and integration of human resources and technical resources. The production headquarters located in Huntington, Cambridge shire, in addition to the most advanced computer equipment and production facilities, more importantly, the staff who operate and design, including scientists, designers, engineers, etc., they are extremely rich in Knowledge and experienced. These advantages are fully reflected in the intelligent building audio products --- the Mission Pro series which developed and produced by Mission. Mission Pro inherits all the unique technologies of Mission, a g